1000+1 ojos
series of four drawings, 350 x 150 cm each, charcoal and pressed carbon on Canson 1557 paper, 160 g.
The "1000+1 ojos" (1000+1 eyes) project is a trip to the Amazon rainforest. It is my logbook, which aims to summarize all
my sensory experiences under the radiant sun and the lemon yellow of the palm trees. Inside the canoe, in full
night, with a coconut and a thousand stars looking at me.
The jungle conveys a unique sense of immensity and mystery. You are there, surrounded by an infinity of
gigantic trees, tropical plants, exotic flowers ... And you see nothing! There is so much information that you feel lost. I felt lost and at the same time unable to contemplate all that wild beauty. Also, in the Amazon inhabits the largest variety of wildlife on the entire planet. Jaguars, monkeys, sloths, anacondas, pink dolphins, piranhas, crocodiles, macaws, hummingbirds, toucans, butterflies ... My greatest expectation for this trip in the jungle was to see these almost fantastic animals up close. But all jungle life is well hidden in this
green labyrinth ...
The most impressive and touching thing about the jungle is that it makes you think about the perception and the senses. You are in the middle of the forest, but, if you don't connect with nature, you can't see anything at all. Because everything is in a continuous, but absolutely harmonious movement. First you observe with the ear and then you learn
little by little to look for each animal in its habitat (the condors in the peaks of the tall trees, the sloths in the
thick logs, the dolphins in the wells ...). There is so much life that, although you perceive its presence, many times you do cannot see it. It's those thousand eyes that are watching you. And the one more is mine (or yours). Because it is already a different eye.
An eye that overcomes sensory vision and opens a new emotional world.
"A flower"
On one occasion Buddha showed a flower to his disciples and asked them to say something about it.
Thew were contemplating her in silence for a while.
One gave a philosophical conference about the flower. Another created a poem. Another devised a parable. All trying
of being above others.
Mahakashyap looked at the flower, smiled and said nothing. Only he had seen it.
«A flower» Buddhist tale. http://cuentoqueyocuento.blogspot.com.es/2007/10/una-flor.html. Retrieved on April 23, 2018.
«1000 + 1 eyes» is a project that deals with my trip to the Peruvian Amazon and wants to share with the viewer a little piece of that magical and unforgettable experience. The Amazon rainforest, as the most extensive tropical forest in the world, contains an infinity of information. My research, based primarily on my personal experience, seeks represent the Amazonian ecosystem, but also its social and cultural particularity. Because there is a unique and unbreakable connection
between human beings and nature. Knowing the beliefs and legends of indigenous peoples, a new world opens up where every existing being has a soul, an owner, a protector. Where human species and animals exchange their status in an unbroken succession of metamorphosis. Where the plants, like the Ayahuasca considered as «mother of the master plants», have the greatest power, which allows the connection with the universe and communication with spirits.
The role and function of art within the Amazonian worldview is also very interesting. In the world of Shipibos (the most important indigenous tribe of the Peruvian Amazon), everything that exists is made up of designs and it is a real opening to the infinite, to the nonperishable. Geometric designs called kené tell stories about energy and form. They come from Ronin (anaconda), the cosmic snake that keeps on its skin all the geometric designs and colors that are seen during ayahuasca visions.
«1000+1 ojos» is a series of four large-format drawings (dimensions: 3.50 x 1.50 m each, technique: charcoal
and pressed carbon on Canson 1557 paper, 160 g.). It´s an imaginary landscape based on photographs I've captured during my trip in the jungle. 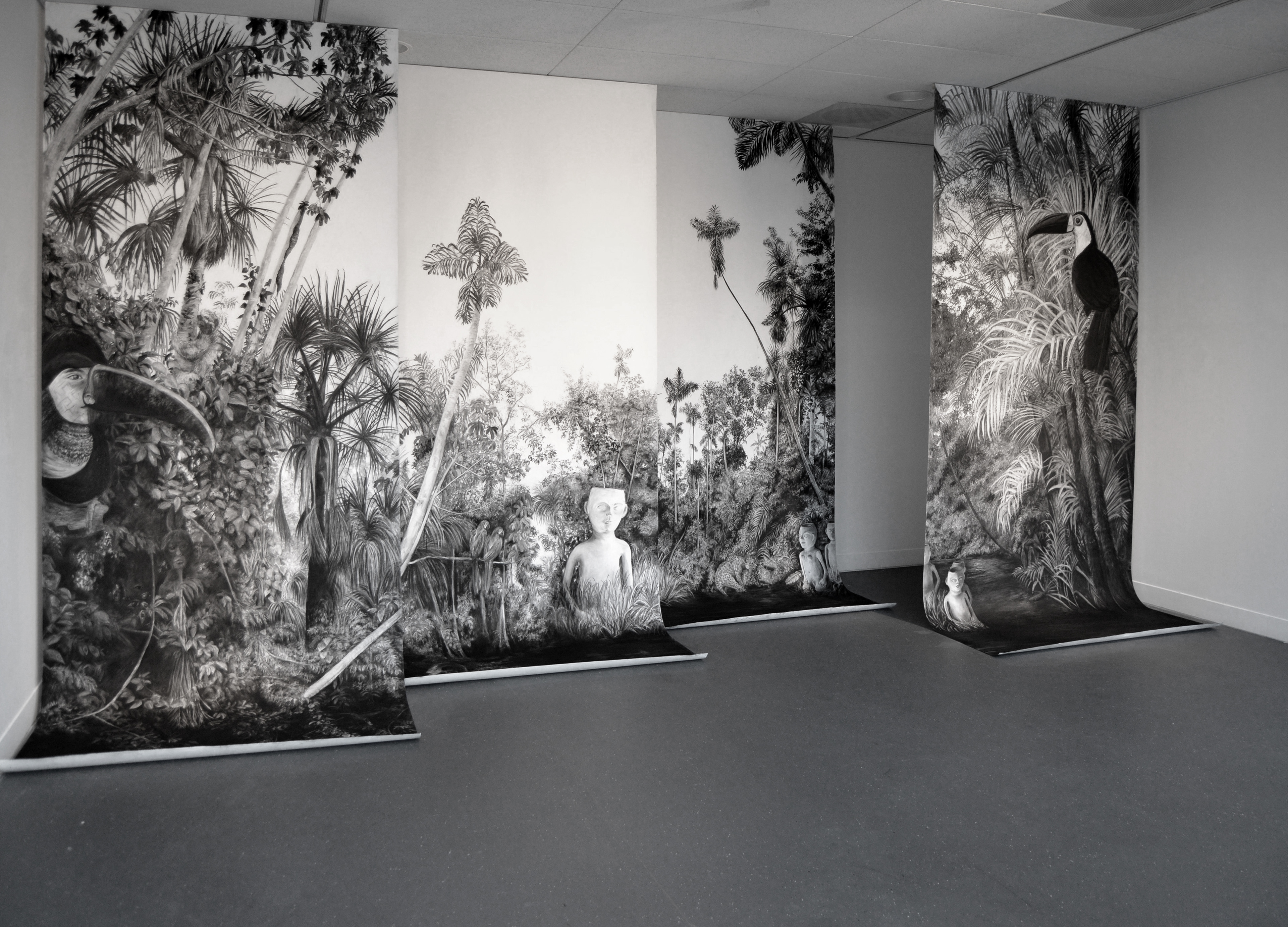 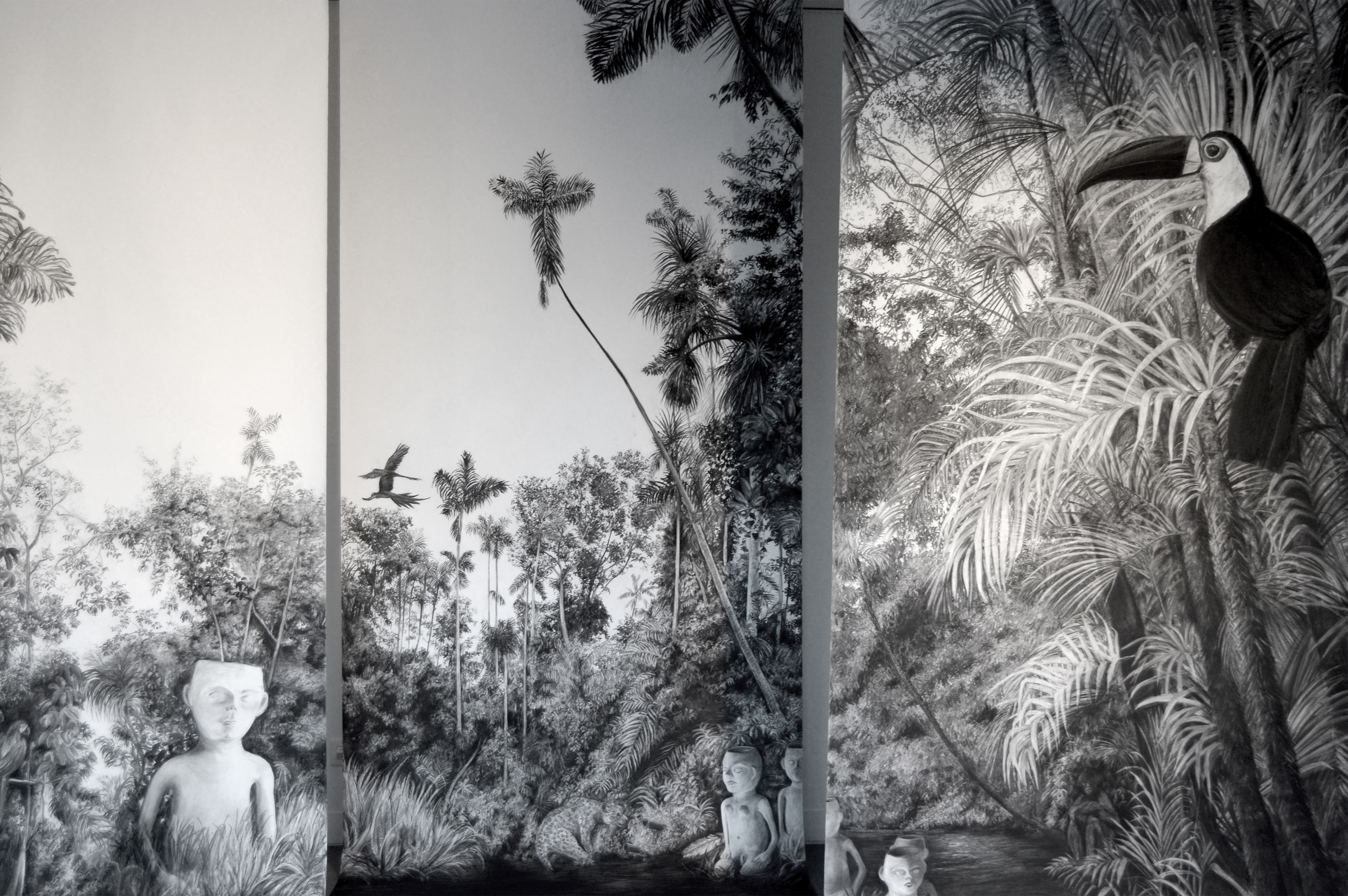 it was tiny maybe pink
↑Back to Top